First on behalf of my mum, Mark and I want to thank all of you for attending this remembrance service for my Dad, Brian Michael Fitzpatrick, often known as “Fitz”.

We are especially grateful considering how close to Christmas we are and a little thing called covid, we thank you all for coming

We have had so many cards, emails and messages about my fathers passing and so many thoughtful and caring messages, it is clear he touched so many people in so many ways. There were common themes from all – caring, trust worthy, humorous, always ready to tell a story and a real gentleman.

All attributes I know I am proud of and one I hope I can live up to.

In thinking what I wanted to talk about today to describe my dad, I looked back at his life and wondered what he had gone through to shape and he had influence him and it became quickly apparent that there was more to cover than time would permit

He was born in Gillingham in 1937, evacuated to Fort William during the war the returning to Kent.  Growing up in Gillingham and the friendships he made through scouting that continue to this day, and we affectionately called them the “camping crowd”.

His dockyard apprenticeship, national service in Africa, back to scouting, marriage to my mum, working at British Gypsum, Rotary, parish council as well as finding the time to take the family to all the museums in London, camping trips, sailing, teaching basic home maintenance and so much more.

Father Rodney provided a wonderful description of my dad during the cremation service and talked about his attributes; sound morals & principles, loyalty, service to others and faith, I think Father Rodney summed up my father perfectly.

Although he has made it a hard act for me to follow.

My father was a great one to tell a story or two and to bring life and humour to an event and I will try and follow his example here:

I can still remember a night as a young sea scout when we had a former scout come back as a guest speaker to talk about his latest exploits and adventures – a “long Walk”. The guest speaker at the end of the night took me aside and told me that his thirst for adventure was started by my father and he was thankful for all the support as a teenager, scouting , and personal leadership that my father had provided, and that in his book about his walk he had put my dad down as one of his inspirations for his adventures. His name was George Meegan and he had just completed the longest walk in history a 30,000 km trek from the tip of south America to the north of Alaska, taking 5 years, a record that still stands to this day.

In looking back I wonder what advice my father gave him to make a person want to go on such a walk lasting 5 years?

Growing up I heard so many similar stories from other scouting events, from camping trips, canoeing adventures, swimming at Bedgebury forest and names like Len & Betty Brown, Roley Wheeler, Bob Child, Mick Baily that shaped so many people. I still look back at my time in the sea scouts, with my Dad as the Group Scout leader, and we knew we were the best scout troop in the district if not in the country and that was from the leadership from him and his fellow scout leaders.

We knew we were invincible. Perhaps now I know what made George think he could walk so far.

My dad also believed in ensuring everyone in the family had the skills needed to maintain a car and house. I had not realized that this was a right of passage and just assumed my cousin, “Jock”, just liked a Sunday roasts with us, every Sunday!. But every weekend Jock would come round and work on the car, build a shed, cut down a tree, wall paper and paint. On one particular day I remember Jock saying ‘why had he to artex all the ceilings’, and my dad replied “well, when you own your own house you will know what to do”. Later on when Jock had purchased his own house he did in fact paint and decorate throughout himself.

As we moved to Hawkhurst it became my turn to learn these skills, although I did ask why it was always me on the top of the ladder fixing the gutters or holding the fence post while he drove it in with a sledge hammer. On one particular occasion I remember the Theobalds dad’s were rodding the drains when they lost the brush. Looking down the drain they knew they could not get down there and my Dad, as quick as a flash, came up with an idea. I was fetched and told I was to be lowered down the drain head first, while they hung onto my ankles, so I could attach the drain rods. After much procrastinating, with why me and what happens if you drop me, I was lowered down the drain and successfully re-attached the rods. When I asked why me, my dad replied “I had to learn that when using rods to keep turning them in the direction of the threads, so they do not become detached, and I would never for that this lesson”

As Liz knows too well, I have kept many of these traditions, from making sure whenever you get a new car you change a wheel, to including the one of not throwing away any screw, nut, washer or other leftover item, as it may come in useful one day! Although my workshop is not as organized as my dad’s!.

I have to admit though one skill I have not learned was working on live electricity, with his comment “It just tingles a bit if you get it wrong”. Sorry dad.

I could continue with other stories about his love for history and his little sound bites such as “why do cars drive on the left”.

What Mark and I used to get up to when he was the mines engineer at British Gypsum and we went with him on weekends, although health and safety would probably have frowned upon our adventures.

The Rotary club and the numerous events he was involved with, such as the stroke club, the French exchange and BBQs.

His passion for golf, although the silly ball did not always know it was his passion especially if water was near by.

And the Parish council, something my mother forced him to put his name forward for so as to keep him busy, which he did later admit we really enjoyed.  I know getting the cinema into the village was something he was extremely proud of, as he knew it was the right thing to do.

Lastly I want to talk about his loyalty to his friends, work colleagues and especially my mother. As Father Rodney said if my dad said we was going to do something then you knew it would be done.

Mum and Dad would have been married for 60 years, come April 2022 and they did everything together from first married holidays at scout camps, to decorating and visits to museums and many more . In the later years as both spent periods in hospitals with various falls and ailments I know he was always concerned about my mum and ensuring she was ok.

Looking back at my Dad’s life and impacts he had on me, our families and so many others I realize he made a difference, and one that I am truly grateful for.

I would ask all of you to remember him in your own ways from his humour, his friendship & loyalty and service to others.

I for one will look to follow his example of living life to the full, being true to myself, loyal & trustworthy and passing on my knowledge to all …… even if they may not know they need it yet.

Again thank you all for coming today 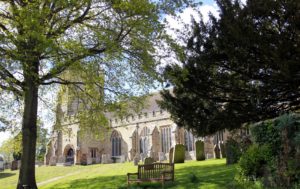